They look like glowing jade necklaces of such unearthly brilliance they could be a Ming emperor’s. But if Dr. Gerardo Fernandez is right, the green fluorescent images of prostate cells could be even more valuable, at least to the thousands of men every year who unnecessarily undergo aggressive treatment for prostate cancer.

That’s because the glimmering images promise to show which prostate cancers are destined to remain harmless for the rest of a man’s life, and thus might spare many patients treatment that can cause impotence and incontinence.

There’s now no reliable way to tell a lethal prostate cancer from one that’s so slow-growing it can safely be left alone: the prostate specific antigen (PSA) test can’t, and neither can looking at the cancer cells under a microscope. But researchers are developing genetic tests, imaging tests, and algorithms like those in face-recognition software in an effort to reduce the 1 million US men a year who have prostate biopsies and, even more important, reduce the thousands who get treatment they don’t need.

“The field is on fire,” said Dr. Laurence Klotz, of Sunnybrook Health Sciences Center in Toronto, whose research has shown that many men diagnosed with prostate cancer can safely choose active surveillance — monitoring to make sure their cancer isn’t spreading — rather than treatment. “There are a whole slew of blood and urine tests already available or on the way that can take a guy whose PSA is mildly elevated and tell him he doesn’t need a biopsy. How much could we drive down overdiagnosis? A lot.”

In the bitter debate about PSA tests, proponents have accused critics of condemning men to die by dissuading them from getting a test that can spot cancers early. Critics of PSA say the screening, introduced in the 1980s, causes millions of men to be further tested and then treated for cancers so harmless they would never threaten their health, leaving many to spend the rest of their life in adult diapers and unable to have sex — all from treatment they didn’t need.

But both sides agree on two things. First, too many men with an elevated PSA have a biopsy that turns up no cancer. That’s a biopsy — usually done by inserting a thin, 12-gauge needle through the rectum, which can cause infection and other harmful consequences — that could have been avoided. Second, too many men are needlessly treated for a cancer.

“This has been a long and chronic problem, in that we have very imperfect tools for cancer detection,” said Dr. Clare Tempany, a prostate cancer specialist at Brigham and Women’s Hospital in Boston. “Ever since PSA came into disrepute, everyone woke up and said, we have to be smarter about this.”

Already a number of beyond-PSA tools let more and more men opt out of biopsy after an elevated PSA reading, which many physicians consider 4 or higher. One-quarter to one-third of men with a PSA of 4 to 10 who have a biopsy will turn out to have cancer, and most of those are harmless.

For instance, a blood test called the Prostate Health Index measures several forms of PSA, not the one kind measured by the standard PSA test; it reduces unnecessary biopsies by about 36 percent, but it misses 2.5 percent of dangerous prostate cancers. The 4K Score, also based on a blood test, “is better than PSA at picking up aggressive cancers,” said urological surgeon Dr. David Penson of Vanderbilt-Ingram Cancer Center. It can reduce unnecessary biopsies by as much as 60 percent, but misses nearly 5 percent of serious cancers.

That has spurred researchers around the world to try to do better, with many labs developing advanced imaging as a way to reduce unnecessary prostate biopsies following an elevated PSA. One, called multiparametric MRI, can reveal the size and density of a prostate cancer, and how well-connected it is to the blood supply. Multiparametric MRI reduced unnecessary biopsies by 70 percent, Dutch researchers reported at a European urology meeting in March, but was as good as biopsy at not missing aggressive cancers.

Next week’s annual meeting of the American Urological Association will feature dozens of studies on advanced MRI. Although many confirm the results of the Dutch study, others are less encouraging. One, for instance, finds that advanced MRI missed the main cancer in 63 percent of cases. But other studies have found fewer misses and either larger or smaller reductions in unnecessary biopsies, leaving many physicians unsure whether to trust it.

“To do an MRI [rather than a biopsy] on the first pass” after an elevated PSA “is an area of active investigation,” Dr. Anthony D’Amico of Brigham and Women’s said diplomatically.

Physicians are therefore eagerly awaiting results from a large clinical trial of MRI called PRECISE. Led by Klotz and launched last year, it aims to test whether MRI is good enough at detecting dangerous cancers, and distinguishing them from harmless ones, to reduce the need for biopsies. From early data, Klotz estimates that it could “allow 250,000 men per year in the US and Canada to avoid unnecessary biopsies and the associated complications including hospitalization, without compromising our ability to identify clinically significant cancers.”

Besides being far from perfect, however, multiparametric MRI costs $1,000 to $2,000. That has made researchers investigate other kinds of imaging that, they hope, will be more precise and possibly cheaper. “There are promising indications that PET and other imaging might do better,” said D’Amico.

PET scans that detect prostate-specific membrane antigen (PSMA), a protein that is prevalent on prostate cancer cells but rare in healthy ones, has shown promise in predicting whether the cancer will spread; a prostate cancer that stays in that gland is almost never dangerous, let alone fatal. Studies are underway to identify which radioactive “markers” will best let PET scans detect PMSA.

“The issue is how precise the scans can be, but the hope is that aggressive cancer cells will take up the markers more than indolent cancer cells,” said Dr. Jeffrey Karnes, a prostate cancer specialist at the Mayo Clinic.

No genetic tests on the market have been shown to identify which men with a high PSA can skip biopsy, but one that Dr. Brian Helfand of NorthShore University HealthSystem and his colleagues are developing — based on more than 100 DNA variants — is showing promise. It seems to pick out the one-third of patients who are most likely to have aggressive prostate cancer, meaning other men can opt out of biopsy.

One 64-year-old patient had a PSA of 4.6, considered the low end of elevated and one that leads many physicians to recommend biopsy, but a genetic risk score 40 percent below the average, Helfand said: “Other urologists he saw were advocating a repeat biopsy, but I recommended we hold off,” which the man did.

At the AUA meeting, European researchers will describe a combination of six biomarkers — proteins in the blood — that reduced unneeded prostate biopsies in men with PSAs of 2 to 10. Of 474 men in the study, 141 of 236 negative biopsies could have been avoided, the researchers will report, which is “significantly more accurate than [PSA] alone in determining the absence of prostate cancer.” The biomarker approach could halve the number of unnecessary prostate biopsies, they estimate.

The second problem both sides in the PSA wars want to solve is that too many men, after a biopsy suggests a dangerous prostate cancer, undergo treatment that they actually didn’t need (because the cancer was in fact harmless). Today’s system of analyzing biopsies can’t reliably tell threatening cancers from harmless ones. 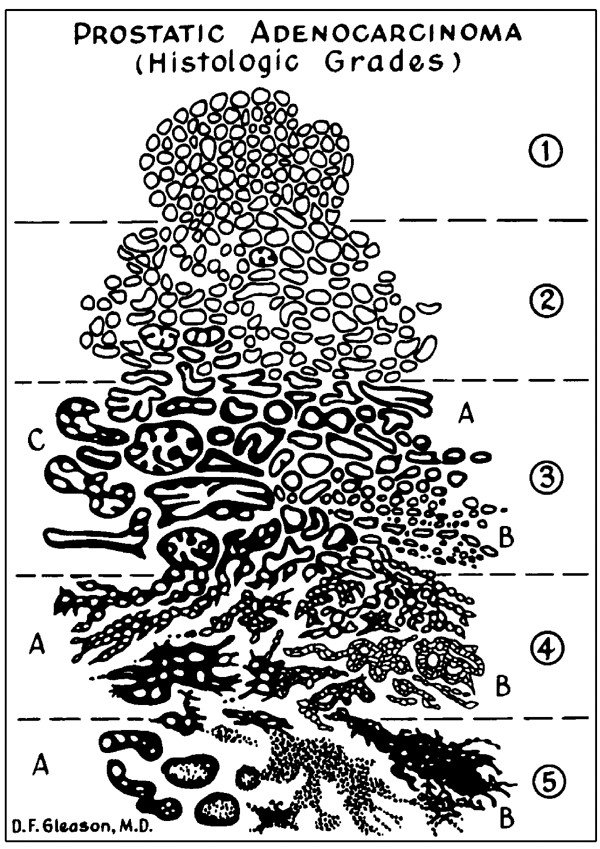 Called the Gleason score, it is a 2-to-10 grading system developed in the 1960s based on a pathologist’s eyeballing the stained, biopsied cells. Those that are regularly shaped and not too packed are unlikely to be a significant cancer, and are graded 3 or lower. Those that are irregularly shaped, angular, elongated, and tightly packed are more likely to be a significant cancer. “A 3 has zero ability to metastasize and is not life-threatening, ever,” Klotz said. “But a 4 is aggressive.”

The challenge comes when a man has mostly 3 but some 4, which produces a score called 3 + 4. These are the men most likely to undergo surgery or radiation or both for a cancer that would never have harmed them.

One hope is that genetic tests can tell dangerous prostate cancers from harmless ones. At least three already in use test for the presence — in ground-up slurries of biopsied cells — of genes linked to aggressive, metastatic cancer.

They “can show if a patient in this gray zone [a score of 3 + 4] has a biologically less aggressive cancer than other men with that,” said urologist Dr. Stacy Loeb of NYU Langone Medical Center. “What to do with 3 + 4 is the most controversial call, so a genomic test can be a tiebreaker.” In a study she will present at the urology meeting, one of the tests, called Decipher, could change minds — assuring a man who was leaning toward treatment that he would be fine with active surveillance, and vice versa — about one-fifth of the time.

But the genetic tests are pricey, around $3,000 or $4,000, and not necessarily covered by insurance. More problematic, they do not give a yes/no answer to whether cancer cells are harmless. Instead, they indicate whether a man has a very low, low, intermediate, or high risk of harboring an aggressive, metastatic cancer.

“The problem is, genetic tests don’t necessarily shift the risk much,” said Mayo’s Karnes. “A man might have a 30 percent risk of an aggressive cancer, before a genetic test, and the test might shift that to 35 percent. What you want is a test that tells you the risk is more like 0 percent or 100 percent.”

Even short of perfection, however, genetic tests are offering men reassurance that they can choose active surveillance rather than treatment. Duane Foulkes, 70, recently sold the manufacturing business he founded near Madison, Wis., when, in late 2015, his PSA test came back over 5. It rose to above 9 three months later, and he had a biopsy at Mayo. His Gleason score of 6 “concerned me at first,” Foulkes said.

But a genetic test indicated that he had at most “a slow-growing, non-aggressive type of cancer,” Foulkes said, giving him confidence to choose active surveillance.

Fernandez’s jade necklaces might do even better. They are prostate cells whose telltale molecules have been tagged with a fluorescent marker that shows up in images of prostate cells taken under a robotic microscope. In the diagnostic system called Precise MD, Fernandez and his colleagues at Mount Sinai Hospital in New York have identified five molecules, including proteins produced by malignant cells but not healthy ones, that promise to tell harmful prostate cancer cells from benign ones.

The researchers started with about 10,000 features, Fernandez said, and then “used artificial intelligence [AI] to whittle that down to the 30 best.” To those 30 they added a couple dozen features that show up on imaging and 5 to 10 variables such as a man’s PSA level and age. “Then the AI goes through thousands of permutations and combinations to put together those that best predict the outcome,” he said, and the resulting algorithm calculates the likelihood of a harmful cancer.

Although Precise MD is still being tested, early results suggest it is significantly better at predicting aggressive cancer than Gleason scores. If more extensive testing confirms that, “we’ll be able to tell men, you’re a good candidate for active surveillance or not,” Fernandez said. “This can really alter the course of treatment.”